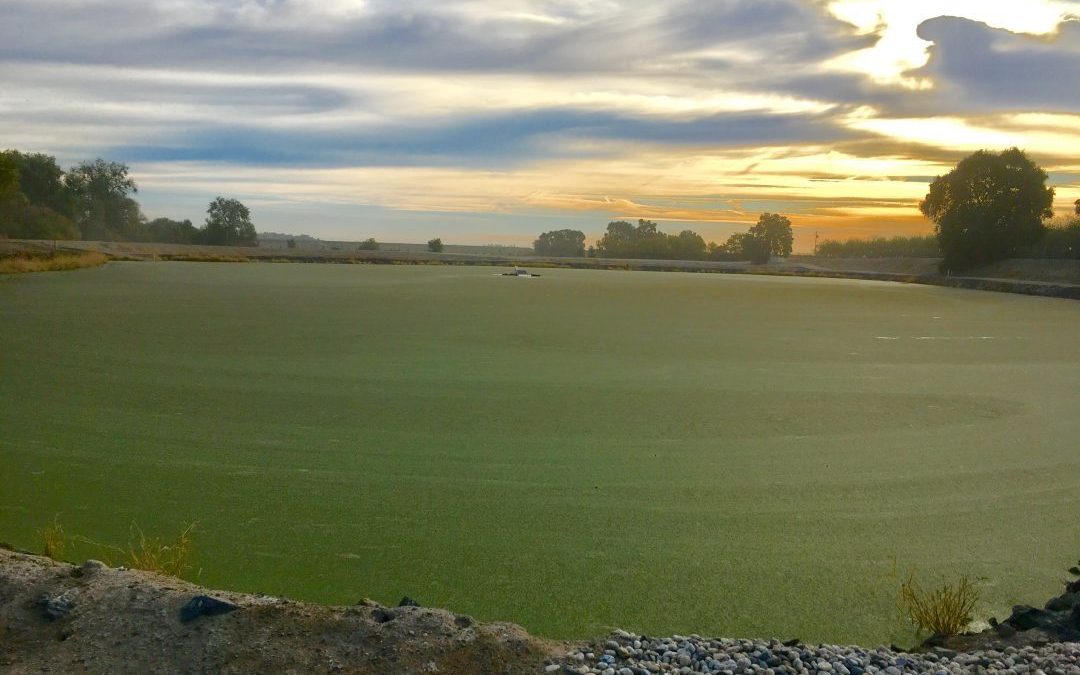 If you follow the Golden State Highway through Central California, you will eventually make your way to the City of Salida. The Salida Sanitary District lies on the southern bank of the Stanislaus River, who’s meandering path defines the border of both the city and county. Viewed from above, this home of 13,000 people appears as a gray square in a greater mosaic of greens and browns. On the banks of the Stanislaus River lay three percolation ponds, which are the focus for this case study.

The District accommodates the wastewater needs of this community. Water is distributed through the city, collected from a variety of waste categories, and is then sent back to the District for treatment. The treated water is then dispelled as reclaimed water into the three percolation ponds. The now phosphorus-rich water encourages an aggressive bloom of algae and the proliferation of plants. Prior to 2017, these ponds were unwelcoming, even deadly, to animal life. Duckweed and Filamentous Algae covered 99% of the water’s surface up to two inches thick, and dissolved oxygen levels stayed at a dismal 1 mg/L.  The District was cited in violation of improper Biological Oxygen Level (BOD) and needed help.

In early 2017, DWI was brought on in partnership with Meras Water Solutions to provide remedial treatment for these three difficult ponds. DWI began by applying a combination of F-30 Algae Control and F-55 Biozyme, a comprehensive blend of enzymes, addressing the filamentous algae population, plus Reward, an aquatic herbicide for the duckweed. The F-30 quickly killed and sank the plants on the surface of the water, and the F-55 expedited the decomposition of organic material. While this treatment significantly reduced plant and algal biomass, it did not address the astonishingly low levels of dissolved oxygen. In response, a Vertex aeration system was installed in each of the ponds to provide artificial oxygenation.

It is well known that river otters are one of the best indicators of a healthy aquatic environment, and it just happens that the Stanislaus River is home to an otter population. Not only were The District, DWI and MWS happy, but the wildlife was as well! In a short period of time after treatment, the aeration equipment was installed, which brought the ponds to a healthy BOD level. The river otters decided that these ponds were now a great place to train their young in the arts of swimming and fishing.

With the newly elevated levels of dissolved oxygen present, local Vector Control introduced a small quantity of mosquitofish as a preventative measure. Today, the fish population is robust, so much so that Vector Control harvests excess fish from these ponds. Turtles, waterfowl, and other species have followed in the steps of the otters, inhabiting the renewed ponds and making them a permanent home. The area has become a fish hatchery, which was the dream of the community for years.

The ponds at Salida Sanitary District are a testament to Diversified Waterscapes’ ability to restore even the most dismal bodies of water. With 45 years of experience, DWI also knows how to create a thriving ecosystem where there was none before.