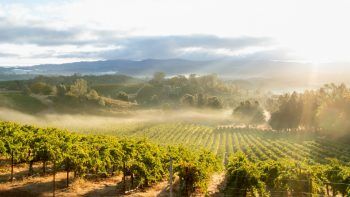 Put it to Sleep Properly: Winterizing Your Irrigation System

Very early in the morning, water treatment expert, Dan Lindberg, walks between the rows of a 60-acre parcel of an 845-acre ranch. The sun has barely shown its face over the horizon and the crows have yet to settle into the barren vines to picked at what remaining dried fruit that may have been long forgotten by harvest. He carefully watches the wetting patterns spreading out from each emitter. The perfect V shape of moist earth, evenly spaced at regular intervals, tells him that the system is working as it should, at least for now.

It is late September.  The last harvest was a week ago and the grower is gearing up to close down their system for the winter season.  From now until early spring, this field will only receive sporadic irrigation as needed and the system itself will sit mostly stagnant. Dan makes his way towards the system for a final check. He takes note of the amount of water and chemicals used since last visit and the general health of the system to report to the grower in full.

His team and the grower’s management are in contact often but at this time of the year, Dan makes sure that he and the grower are on the same page and that they are as informed as possible. They discuss everything from DU trends to possible issues in the future as the ranch expands. The grower is happy to hear about the progress Dan’s team has made and the level of care they had shown the ranch at every turn. He shares that he has seen a return on investment in his field since Dan began treating his irrigation system.

Item by item, Dan and the grower analyze the efficiency of their irrigation system and build a plan for the next year. Dan’s technicians had noticed that certain times of the season during the hotter months and times when the aqueduct had more algae blooms than normal, that sections of the block would experience plugging on occasion, so he and the grower discuss adjusting their chemical ratio as well as introducing additional chemistry if needed at certain times of the season.  They also decrease the amount of chemistry purchased to maximize savings before coming up with a maintenance plan. There is only one last item to discuss.

Would they consider winterizing their system this year?

Dan explains that the process is simple and cost-effective in the long run. He and his technicians would start by applying product prefilter to remediate the media in the sand media tanks, and everything down stream.  They move on to applying chemistry on the other ranches, PAA (Peracetic Acid) and chlorine dioxide have worked well with this particular water source to the system as a whole. The chemistry will sit in the system for as long as possible, discouraging biofouling in the lines, and off-season contaminants.   It is also meant to extend the longevity of equipment.

At the start of the next growing season, the system will be flushed. The oxidizers would be dumped from the system at once, revealing clean, ready-to-work lines. The grower can then hit the ground running without wasting time, money, and labor on remediating a system that has become plugged with biofilm or dealing with water that has been filled with worsening contaminants.

The grower considers Dan’s advice carefully. He asks many thoughtful questions that Dan is able to answer in detail. They have worked together for a few years and he has yet to come across an issue, even at the start of his growing season. He trusts them. Still, though Dan’s winter sanitation proposal makes sense to prevent an issue come spring, he ultimately decides against winterizing the system since they have not experienced issues in the past. It is simply one more cost that he is unsure of.

Dan completely understands. Making decisions like this can be difficult, he knows that as long as he is able to offer them accurate, usable information to help produce a good crop, he has done his job.  After small talk about winter projects and tasks around the ranch, he gives them the rest of their data before checking the vineyard one last time and drives out. The sun is fully overhead now, and the wetting patterns are no longer visible as they were when the sun was rising.  He hopes the next time he visits; they will look exactly as they did that morning.

Start of the growing season

Fast forward to early March, Dan receives a call from this grower.  The grower fired up his irrigation system for the first time on this block to check for leaks.  There is a problem. Within 24 hours, his team is onsite. The first thing he does is crouch down to look between the trellises of bare, brittle vines. The faint wetting patterns are concerning, to say the least.

The perfect V’s of moisture are few and far between. Instead, it looks as though many of the emitters are only dribbling enough water to create two to three-inch halos. It comes as no surprise that when he checks that pressure gauge, it has extremely high readings. The flow rate though is what seals the deal. The reading is showing a staggering decrease of 350 gallons less than the recorded rate this time the previous year.

He suspects that there is a major plugging issue, most likely due to a combination of unusually high temperatures at the end of the growing season and the stagnation of a hibernating system – unfortunate consequences of the decision not to winterize.

While Dan mobilizes his team to do a full field evaluation and distribution uniformity test, Dan cuts open a hose-end and allows the water to pour into his palm. He can see, right away, that the water is cloudy. Specs of biological contaminants cling to his hand, even after he allows the water to slip between his fingers and to the ground. He peers into the hose and wrinkles his nose. The walls of the hose are covered in slimy biofouling. This is a remediation, and it needs to happen fast.

They shock the system with a custom mixture of chemistry. The oxidizers quickly get to work, cleaning up the biological contaminates, eating away at the unwelcome materials that are gathered around each important component of the system. The team carefully monitors the DU and flow rate. Both gradually begin to show much better numbers. Still, Dan knows the damage is done.

One by one, unsalvageable hoses and emitters are replaced with new ones. Employees who would otherwise be busy preparing for the growing season are tasked with walking the rows of vineyards, watching for leaks, or plugging. Valuable time and labor are expended but without clean lines, nothing can progress so there is no choice. Eventually, the system is moving along as it should – but at what cost?

The remediation takes place over the rest of the scheduled irrigation event.  Between labor costs, replacing tubing and emitters, Dan estimates that the entire event cost the grower exponentially more than his initial quote for winterization.  He supposes, at the end of the day, the price will be paid, the only question is when and how much.

Next year, the grower tells Dan that there is no question, as a prevention measure, they will be putting their irrigation system to sleep properly. Winterization is no longer an option when the alternative is so expensive.

This time, Dan walks the field in the evening. Once again, the sun is low in the sky and casts the perfect golden glow for him to see the wetting patterns at his feet. He smiles, each one is as perfect as the last. For now, that will not change.